Makwela is finally back, without the cubs. Yesterday morning the new male leopard (Tegwan) the same one that killed one of makwelas cubs killed a bushbuck in camp and dragged it ito a tree between room 8 and the diningroom, (we are not called LEOPARD HILLS for nothing).

After morning game drive we found that the male leopard had taken the kill to the river bed in front of camp. We departed on afternoon drive and headed straight for there.

We viewed him feeding on the kill.

This morning we got to the kill and MAKWELA was there, she had stolen the kill from him, justice. She seems to have been a fight but sure she will pull through.Oh and never mind the proverdial hyaena lying in wait for the scraps. 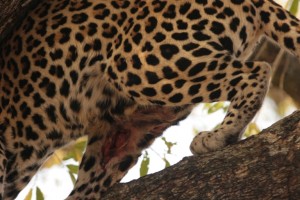 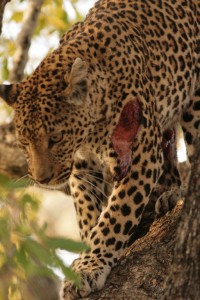