We have always had the policy of waiting for a leopard to become independent of its mother before officially giving it a name.

Leopards are named after the areas that they frequent on a regular basis, for identification and research purposes.

Due to the fact that Makwela now has new cubs of her own, we have officially named her previous daughter the “Hlaba Nkunzi Female”, named after one of the water holes south of Leopard Hills Lodge.

Thanks to Marius for the great shot of her below: 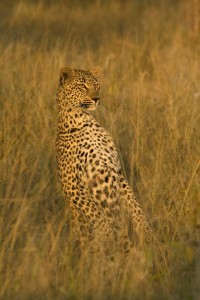