This past week we have been blessed with 3 outstanding lion sigthings.

A couple of days ago we found some tracks for the Sand River pride right on our doorstep as we set out for our morning safari. We followed the tracks and found them. Following the 7 lions on their way north they eventually spotted a herd of impala in the distance. The 2 females went in opposite directions and started circling, leaving us with their 5 youngsters. I decided to stay with the youngsters instead of following the females as the bush was quite thick and the vehicle would draw too much attention. After about 5 minutes the impalas alarm called. All 5 youngsters jumped up and ran straight towards the noise. We followed them and found all 7 lions on an impala kill! There were lots of growling and fighting as each wanted as much meat as possible! 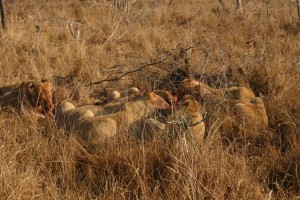 The second sighting was also of the Sand River pride. We followed their tracks all the way to the northern part of their territory and after a whole afternoon of tracking eventually found them on a fresh kudu kill.

But the third sighting was the ultimate! Marius found the Xhimungwe pride (1 old male, 1 old female, one young male and 4 young females) yesterday afternoon. The lions were still fast asleep so we decided to have our Sun downer before going to the lions. As Marius and I pulled into the sighting the lions got up and started walking. It was clear that they were hungry and ment business! We followed them to an open clearing and watched as they made a half hearted attempt at a herd of wildebeest and impala, but no success. They stopped, sniffed the air and got a wiff of the big buffalo herd that was close by and started to move in that direction. Neither Marius nor myself (never mind our guests!) could believe what we witnessed next! The lions crept up on the heard and the next thing we saw was a big buffalo storming past with all 7 lions not far behind! In the darkness we could hear the distressed animal bulking away and chased to the seen; all 7 lions were on the buffalo, trying to wheigh it down, the young male jocky riding on its back. Unbelievable! But the lions’ victory was short lived; the herd came to the rescue of the poor bulking buffalo and chased the lions off! For the next 10 minutes we sat and watched lions chasing buffalo and then being chased back again all the time keeping our escape routes clear in case the buffalo stampede in our direction! The lions gave up and by a final charge of the buffaloes were driven off.