At Shigamba pan this morning, we came across something quite special

We followed the 3 males for a while on game drive last night, it was a pretty quiet and dark night with the moon’s light not shining through the heavy clouds. The 3 gave us an amazing roar very close to the vehicle while moving across a clearing. We then left the males as they silently moved into thick bush, certainly knowing where they were heading. During the night they roared quite loud close to the camp, so we knew they hadn‘t gone too far.

This morning, starting our drive, not sure what the morning would hold, we left the lodge with a beautiful sunrise. Looking for tracks on one of the roads in the direction where the males were headed, to see if they crossed we did a loop back towards the clearing in front of the lodge and came across the 3 lions.

2 of the lions were already sleeping, as they had their fill and the one male was still busy with the hippo and then soon after dragged it into a bush nearby the watering hole. They had killed this young hippo during the night and had already eaten quite a bit of it.

If we had been 10minutes later we might have missed all the action, but it was incredible seeing the male’s strength as he pulled the carcass down into the thicket.

We’ve seen the hippo around the watering hole numerous times, so it was quite sad seeing that the lions had taken him down, but on the other hand it’s so great seeing them do what they do best.

This was another special morning in the Sabi Sand Game Reserve. 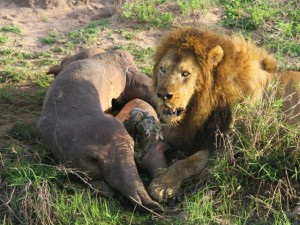 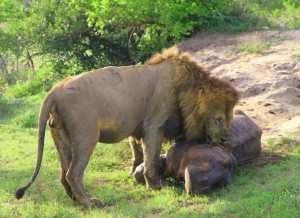 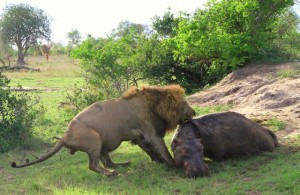 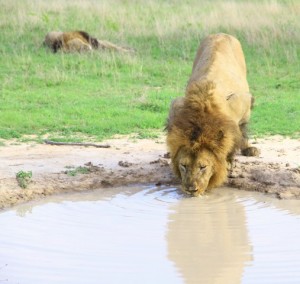 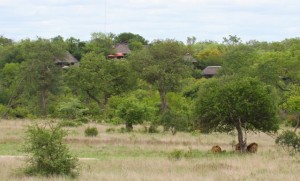 0 thoughts on “3 Mapogos Kill a hippo”