Exciting Morning when the Cheetah moved up close to the lodge

During last week there was an update from the East of the Sabi Sands Western Sector, saying there are 3 Male Cheetahs to the East of our Traversing area, but they were heading West, after which we didn‘t hear anything of the 3 Cheetah.

After leaving the large herd of Buffalo on a clearing in the south, we heard an unexpected call that 3 Male Cheetah had been located in a clearing not too far away! This was great news, with the Sun on the set, we managed to get a look at the three moving through some thick bush, clearly not sure of the territory that they are in with the Larger Male possibly still in the area.

Starting this morning’s drive, we were surprised in hearing that the tracks were coming straight up North towards Leopard Hill’s Property and towards the Lodge itself. After quite some time someone managed to find the animals, which ended up being not too far away from the clearing in front of Leopard Hills. The Cheetah then moved to the pan where the Male Lions caught the Hippo some time ago, with one of them having a drink, but constantly looking around to see if there was danger around.

With us giving the Cheetah enough space, it was hard getting a good shot of all three Cheetahs together in the long grass. Two of the Males were quite comfortable and posed in the open, giving perfect photo opportunities to the guests.

Incredible having the three Cheetahs in the area of the lodge, hope they will stay around the Western Sector of the Sabi Sands – which should offer some awesome viewing. 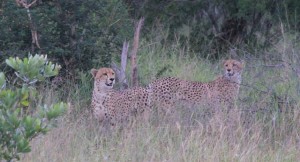 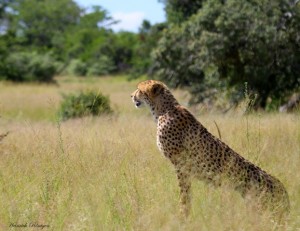 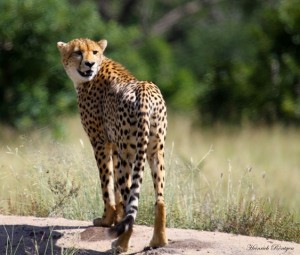