Early, soaking Spring rains have transformed the dry, dusty the landscape into a rich green scattered with different flashes of colour as many trees begin to bloom. Most striking are the thousands of sweetly scented yellow flowers adorning the very aptly named Scrambled Egg Bush or Mopane Pomegranate!

This colourful specimen is next to a pan close to the lodge.

Along with all the fresh Spring growth a budding new wildlife photographer has sprung up…drum roll…introducing Raymond!

Another stunning African sunset spent with a journey of giraffe, a tranquil scene captured perfectly by Ray. 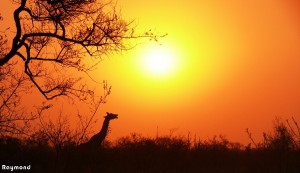 Always something happening up on the Sand river! Here a crocodile sun’s himself as 3 species of waterbirds are unfazed (Black crake in flight, water thicknee and blacksmith lapwing) 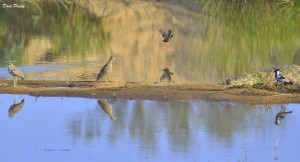 A different perspective created by some stately kudu bulls feeding atop a termite mound at sunset. 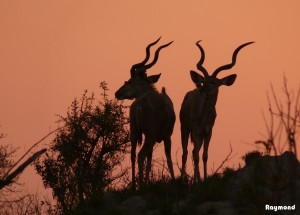 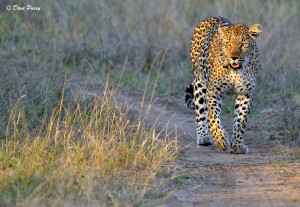 She definitely has a cub/cubs hidden somewhere along the Mabrak river as she has been returning to the same spot for the last 2 weeks. This image is of her heading to possibly suckle after finishing off an impala kill (See video of her feeding).

We hope some good luck is on her side with this litter and maybe she will show a cub or two to us in the next few weeks! 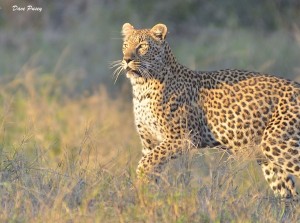 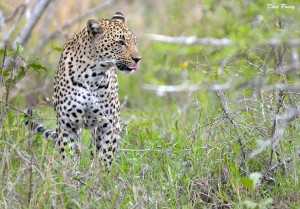 Finally we have an image to share of this young leopardess who has been missing in action, she was found in the dense north a few times and is looking as healthy as ever! Wonder if she will settle up there and attempt her first litter…time will tell!

Metsi
Hardly seen this month but her tracks have headed up one of the nearby hills over the last few days…dare we suggest that she also has a litter hidden up there!

Xikavi
A lot of her month has been following Dayone around as he patrols his territory, she was even seen in the open grasslands of the south, a whopping 10km out of her usual riverine territory while following him! They have been mating and let’s hope for some success for this 7 year old female who has yet to raise a successful litter!

See video for footage of her marking her territory, she needs to make it clear for Hlaba Nkunzi as the 2 females vie for prime space.

Shangwa
The grandmother of the west appeared a few times along the northern bank of the river.

Kashane
One or two glimpses of him during the month but his interest in the west of his territory has waned a bit since Hlaba Nkunzi probably has cubs. Possibly he is also feeling pressure from the burgeoning Dayone male! 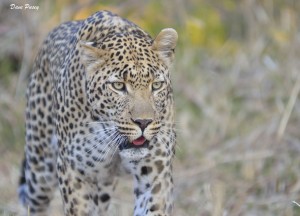 With Xikavi hot on his heels for most of the month he has been patrolling his expansive domain (they have been confirmed mating)! Not without a little irritation shown by the big dominant male! (See video).

His confidence and size just becomes more and more impressive, looks like he is going to be here and secure his territory for the females and their cubs for a long while!

Maxabeni young male
He is still frequenting the south where Dayone and Kashane don’t really venture, he is getting much bigger and at 3 and a half years it is a matter of time before he becomes a potential threat to the 2 dominant male leopards. 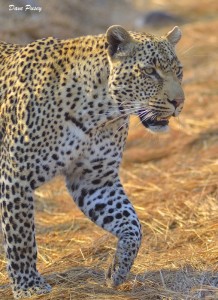 Like Maxabeni this 3 year old youngster is testing the water over here, hopefully he doesn’t get too comfortable and Dayone sends him on his way otherwise he may potentially kill cubs…if he finds them! 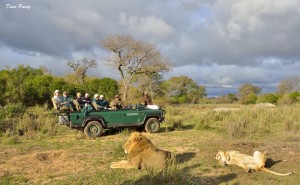 Selati Coalition
The darker maned Selati high up on the rocks, scouring his territory with a belly full of buffalo! 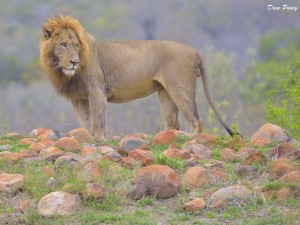 A testing month for the young kings of the west!

On the flip side they shared their first buffalo kill with the Ximhungwe females after the strong lionesses brought down an old bull. See video for some nice interaction at the kill. For the first time since the takeover we actually have a pride! 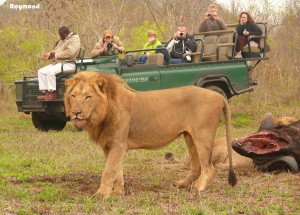 They also faced their first challenge as the Majingilane Coalition stole the Othawa females for 2 nights on their eastern boundary! The 2 coalitions roared at each other throughout the night but there was no battle, seemingly the Majingilane are stronger as they are older and in their prime but the Selati boys did stand their ground and the Majingi’s went straight back east the following day! See video for more of their impressive roaring!

Ximhungwe pride
Short tail female shortly after feeding on the old buffalo bull that 3 of these tough lionesses managed to subdue! 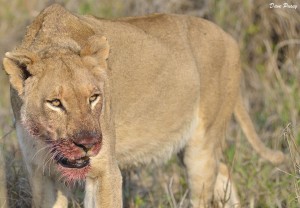 Lots of mating still going on with the Selati boys…not always too impressed with their performance, see the look on her face below! 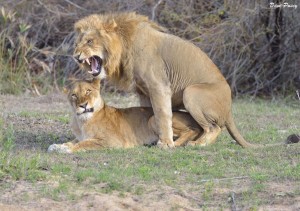 Pack of Painted Dogs that denned here in 2011
What a treat to see them frequently at the beginning of spring! The pups are at that age (Around 4 months) where they are so curious and playful, especially with their food. See images below! 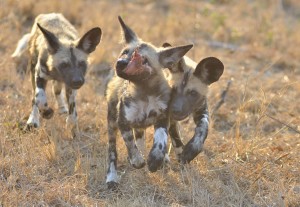 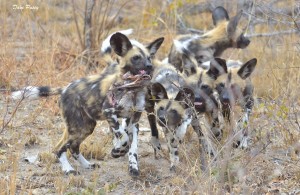 See video below of why these endangered animals are always such a pleasure to spend time with, one dog receives an earful from a fellow pack member.
[FMP width=”640″ height=”360″]https://www.leopardhills.com/wp-content/uploads/2012/12/20120925-Dogs-sep12.flv[/FMP]

Buffalo
The large herd has again been frequently seen as well as many old bulls up in the north along the river.

Elephants
A different perspective of an elephant crossing at sunset! 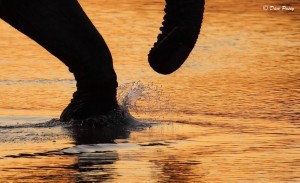 At the moment first prize is to head up to the river and try and time our arrival with the excitement of a parade drinking or splashing across. 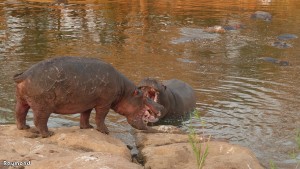 Wonderful hippo viewing continues and there is still some niggle between bulls with water levels still quite low as in the above image.

Interesting sightings in September
A stubborn honey badger always creates a flurry of excitement! We came across this individual who had just dug a yellow throated plated lizard out of a termite mound. He gave us one brief stare before running off with his trophy! 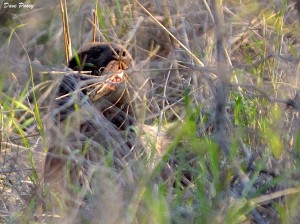 Not a great image but we managed to at least get a glimpse of him through the long grass and some evidence. This proves how these chaps are expert diggers with their 3.5cm long and razor sharp foreclaws, the hole that he excavated was half a metre deep!

Spotted hyaena sightings are almost daily at the moment, this guy was seen training his lungs in preparation for crossing the river this summer! 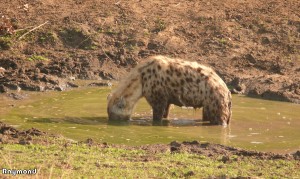 Seriously they often wallow in a waterhole for hours to cool after feeding as their powerful digestive system heats them up!

The migrant swallows are back and preparing their mud nests, we caught these red breasted and lesser striped swallows at the same mud wallow with lots of mud on their faces! 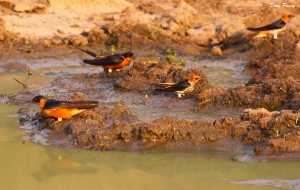 Tawny eagles are renowned as avid scavengers and often kleptoparasitise other birds and animals, this one stole a morsel from some vultures at an old Ximhungwe lioness kudu kill. 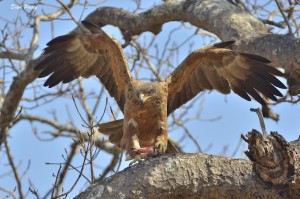 Owl sightings peak this time of year as the foliage is less dense, this white faced scops owl posed in the open for us and is one of the rarely seen medium sized owls! 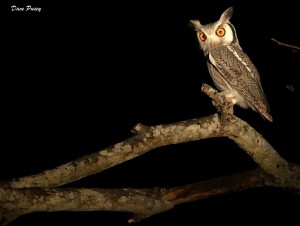 Another intra African migrant just back and in his breeding plumage is the stunning African paradise flycatcher, this male paused briefly for a quick shot. 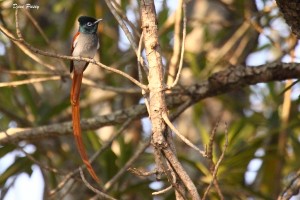