Impala lambing season is upon us and this year the long legged lambs dropped earlier than the usual 15th – 22nd November mass birthing! Due to the saturating rains and lush green landscape, we spotted our first lambs around the 7th November. 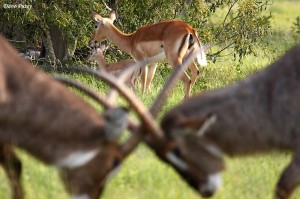 Here a little lamb is taken away from the action of some duelling waterbuck bulls by her protective mother.

Sunsets are as striking as always, this one was spent with a venue of vultures waiting their turn to scavenge the remains of a buffalo killed by the Selati males. 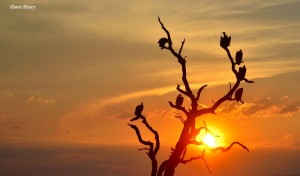 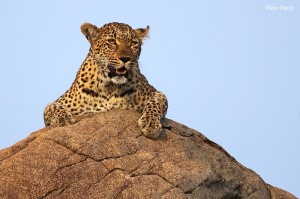 Her den site atop a rocky hill provided many hours of anticipation, patient waiting and eventually really exciting viewing at the beginning of the month. See video of some fantastic mother and cub interaction. 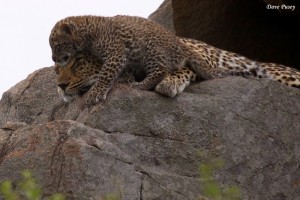 Knowing the little cub was there and then waiting for a scurry across the rocks or a glimpse through the green blades of grass and even possibly a photo was such thrill for our guests.

This great moment and image below was taken by our guest and talented photographer, Jonathan Price and he kindly shared it with us. 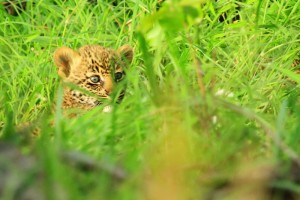 Here is another fleeting view of the cub, justly rewarded for sitting at the den site for many hours! 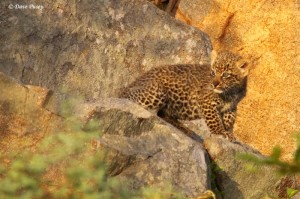 She has now moved her den site to a nearby bush camp, it is still possible to view her at times but is a little more limited. We wait to see if she brings the cub towards her beloved Leopard Hills soon.

Metsi
This particular sighting at her den treated us to once in a lifetime mother cub interaction, thoroughly enjoyed and appreciated by all the Leopard Hills guests.

The adventurous but now rather large cub decided to venture a little too far from the den for mom’s liking. 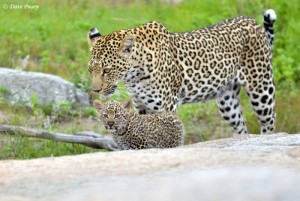 So with much difficulty she picked up the heavy youngster and placed him back in the safety of the rocks. 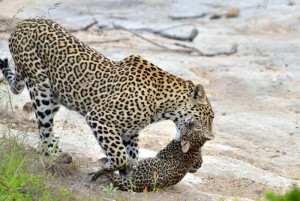 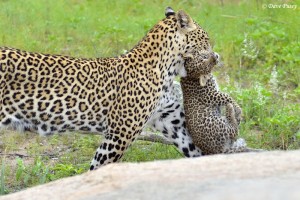 She has had a tougher time than Hlaba Nkunzi though and has moved her den site every few days. First it was the Ximhungwe lionesses that passed perilously close by so she relocated, then it was one of the Selati males snooping around and most recently it was the young Nyeleti male leopard who poses the biggest threat, sniffing around in the area! She has now disappeared with the cub and we wait to hopefully find them again soon.

Thlangisa
Still residing up in the north, she surfaces very rarely in the dense environment up there but when she is found she is as playful as always!

Xikavi
As usual in summer she is found less often in her dense habitat but she is possibly pregnant now after completing mating with Dayone. 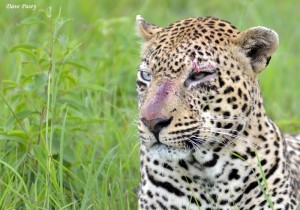 Battle scarred above after a brutal clash we think with the big young Maxabeni male who has been intruding in his territory. We wait to see what the outcome is going to be between these 2, one would think Kashane has his number but time will tell…

Dayone
Missing for over 2 weeks during the beginning of the month, there was a wave of concern and speculation that swept over the western Sabi Sand bushveld for this extremely popular handsome male.

He is a fighter though and turned up rather beaten up but OK towards mid month, whatever adversary he encountered out there gave him a real test! We don‘t know if it was another male leopard, lions or hyaenas…see video of him dragging his kill while regaining some strength, see the injuries on his back left leg in particular.

He is such an impressive and relaxed specimen of a male leopard, the females with cubs and our guests are all rooting for him to come back with a vengeance. 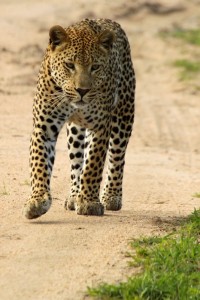 Only just over 4 years old but he really is a large individual and he doesn‘t seem to be backing down to intimidation by Kashane! 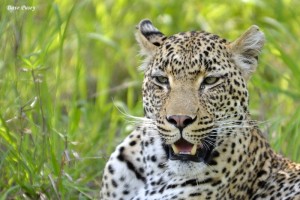 Now 3 years and 6 months old, he is not very big yet but still poses a threat to the cubs if he is not sent on his way by Dayone! Apparently he killed one of Ravenscourt female’s cubs on our eastern boundary!

Something has to give with all these males now in the area, let’s hope the 2 bigger older males stand their ground and protect their offspring! We wait eagerly to see what happens in the next few months. 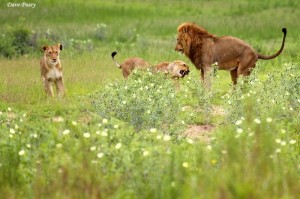 Most of their month has been with the Othawa females that don‘t have cubs, see the submissive posture of one of the lionesses in the above image. There is still much contesting for mating opportunities with the young lionesses.

Otherwise they killed another buffalo bull during the month and have been up to their usual patrolling and marking as a tight and formidable unit of 4. See video footage. 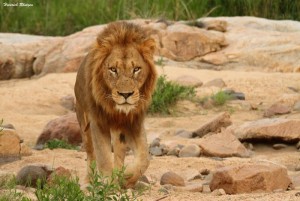 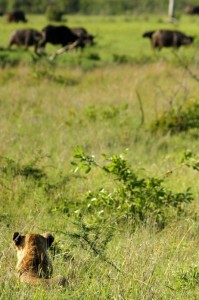 The cohesion of these tough and wily experienced lionesses managed to subdue a buffalo cow during the month and fill their hungry bellies, here is one of the lionesses eyeing out the prize just before the successful hunt!

Fantastic news is that the short tail lioness has given birth, we have seen all the visible signs and now look forward to seeing the survival of the first Ximhungwe cubs sired by the Selati boys!

Othawa Pride
At least one lioness has very young cubs while the other 2 have been mating with the Selati males regularly during the month. 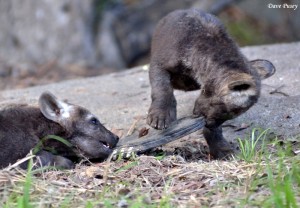 In the image above the little cubs test the toughness of an Adidas shoe…watch the video below to see how it passed with flying colours!

Remember to never leave your smelly shoes outside on your doorstep!

Pack of Painted Dogs
Great excitement as they returned for a few action packed days of chasing everything they came across and turning a relaxing game drive into a roller coaster of an adventure! One sighting was really memorable as they chased the shy male leopard from the north (A male we had never properly seen) up a tree so we could get a good look at the big boy! See video footage under leopard November video.

Sadly it seems like one adult and 2 pups have been killed in the last 2 months, the pack now consists of 7 adults and 4 pups…still a very healthy number of 11.

Elephants
Elephant parades have spread out into all tantalising green undergrowth so it a more of a challenge to find them but very rewarding when we do as there are many young calves around! There is lots of water around to wallow in on a hot summer’s day! 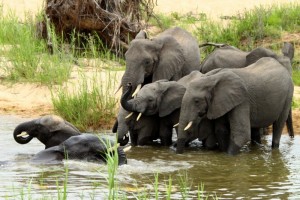 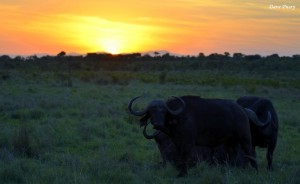 A dusty sunset spent with the large herd of 500 leaves one with a true sense of the magnitude and vastness of unspoilt Africa at her best.

Mating pair of Wahlberg’s eagles, this is the first time for all of us to see this and even more unusual to see the female is a pale morph (much rarer) than the normal brown morph male! 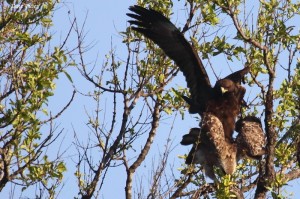 Usually shy and retiring this relaxed white tailed mongoose was foraging for insects and allowed us a chance to take some images and view him before he scurried off into thicker bush. 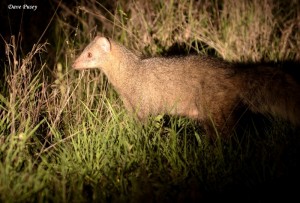 A water thicknee with a rather strange food source! It is well known that civets relish millipedes but most other animals avoid them…or do they?? 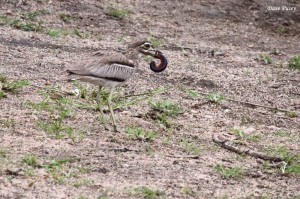 This is due to the series of defensive glands along both sides of their body that secrete defensive secretions of varying sorts that are generally foul tasting and sometimes either poisonous (Type of cyanide) or sedative.

Upon further investigation and observation it seems they are also eaten by frogs, lizards, tortoises, birds such as francolins, guinea fowl, herons, robins, starlings and now a water thicknee to name just a few. 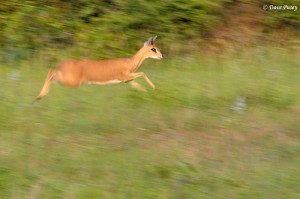